Lysippus (Ancient Greek Λύσιππος, Sicion, Peloponnese, c. 390 B.C.-c. 318 B.C.) was a Greek classical sculptor. Lysippus, Scopas and Praxiteles are considered the three great sculptors of the second phase of classicism (4th century BC), a time of transition between the classical Greek era and Hellenism.

The scholar of his work faces a number of problems of method: the extensive workshop of Lysippus, the demand for reproductions of his work while he was still alive and later among Hellenistic and Roman amateurs, the number of disciples directly in his circle and the survival of his works only in copies. He was also the reformer of the canon of Polyclitus and a great innovator with respect to the inherited conventions.

He was born in Sicion around 390 B.C. A bronze worker in his youth, he taught himself the art of sculpture, and later became a leader of the school of Argon and Sicion.

He lived in the age of splendor of Alexander the Great, of whom he was the favorite artist and official portraitist. He portrayed him on many occasions in numerous works now dispersed. The description of some of them has reached our days through the writings of Greek historians and philosophers.

In particular, Lysippus portrayed Alexander in the act and bravura gesture of hunting a lion, in combat and in various heroic postures, and sometimes in deified poses. A recently discovered epigram by Posidippus, in the anthology represented in the Milan papyrus, was inspired by a bronze portrait of Alexander:

Lysippus, sculptor of Sicion, bold hand, learned craftsman,
your bronze statue has the look of fire in his eyes,
that which you made in the form of Alexander. The Persians do not deserve
reproaches. We are to forgive the sheep that flee before a lion.

We owe to Lysippus the typical representation of Alexander as an inspired, deified figure, with disheveled hair, half-open lips and looking upward; a good example, a Roman copy of the imperial period found at Tivoli, and preserved in the Louvre Museum.

For his contemporaries, he was considered the successor of the famous sculptor Polyclitus. They emphasized his grace and elegance, the symmetry or coherent balance of his figures, with heads smaller than the canon of Polyclitus, which gave the impression of greater height. He was famous for his attention to detail in the eyelashes and toenails.

The production of Lysippos

Lysippus was very prolific. Tradition speaks, regarding his works, of an enormous production, estimated by some sources at about 1500 statues (says Pliny the Elder), most of which were made in bronze. Many are the statues of the winning athletes in the Greek Olympics at Olympia, and there are reports of numerous chariots in marble and bronze.

In the last years of his life, he erected in Tarentum a statue of Zeus, about 17 meters high, represented in erect position next to a pilaster with an eagle and in the act of throwing thunderbolts.

Of this immense work, no original has survived to our days, but only Roman copies.

His most important work is the Apoxyomenon, of which a Roman copy is preserved in marble, while the original was in bronze. It represents a young Greek athlete in a vulgar position.

He is removing the sand stuck to his body due to sweat with a strigil, an instrument of the time, made of metal, iron or bronze (which the Romans called strigilis), used only by men and, mainly, athletes: similar to a scraper, it was used to clean the dust, sweat and excess oil that spread on the skin before the competitions. It has slender proportions and a flexible body.

The baths of Agrippa were decorated with two statues of Lysippus; that of Apoxyomenos and that of a recumbent lion.

The work is preserved in the Pio-Clementine Museum in the Vatican City.

Lysippos The renewal of art and perspective

Lysippus, along with Praxiteles, Scopas, and Apelles, was one of the absolute protagonists of the art of the late classical Greek period.

With Lysippus, sculpture was stylized, as he lengthened the canon of sculptures and emphasized realistic individualization in portraits. Indeed, one of his greatest merits was to modify and renew, first of all, the canon of proportion for the representation of the human body, which had previously been set by Polyclitus at a ratio of 1:7. Lysippus revised the canon by increasing it to seven and a half heads.

In addition, he created a new school of sculpture, that of the physiognomic and individual portrait that, reproducing the external appearance of the subject, also suggests the psychological and emotional implications. His renovation, however, started from the Greek tradition.

His work is a synthesis of the charis of Praxiteles and the pathos of Scopas. He was the master of many Hellenistic sculptors.

Lysippus was, perhaps more than others, exceptionally courageous in the volumetric production of the figure, printing an even more significant turn, in the transition from classical art to the Hellenistic era.

Lysippus' genius led him to break new ground in the sculpture of the time. He was the first to intuit the possibility of modeling the statue, based on a circular point of view, 360 degrees, and not from the perspective of a single point of view, fixed, as had been worked until then which, in terms of staging, numbed the figure, making it lose strength, expression and vitality.

His intuitions imposed him as the most complete and modern sculptor of his time, being able to control the form of his work, in every possible perspective and angle of vision.

The conquest of figurative harmony in space, in an all-around circularity. It was above all thanks to this, that he was able, first to imagine, and then to realize, those works of great scenic effects and of great visual, aesthetic and monumental impact. For these characteristics, it was for the art of the Hellenistic period, a sure point of reference, a beacon.

With the right balance between proportions and body position, he derived life and elegance for his statues. His intuitions transmitted a teaching that would then have a constant continuity, numerous and of sure value, in the following centuries.

Hellenism was characterized mainly by the change of the canons of aesthetic beauty, together with the sense of movement of the figure, characteristic of all the works that achieved it.

The intuitions of Lysippus, and his studies on the human figure, were followed by another great Greek artistic personality, in the field of sculpture, Apelles.

His pupil, Chares of Lindos, built the Colossus of Rhodes, one of the seven ancient wonders of the world. Since it is a statue that no longer exists today, it is still debated whether it was cast in bronze or covered with a bronze sheet. 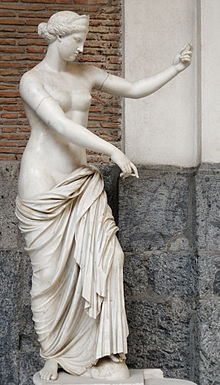 The discovery of many statues and statuettes in bronze or marble representing Aphrodite (Venus), goddess of love, shows that in the Hellenistic period the female figure was frequently used as an artistic subject.

A contribution of the artistic work of Lysippus is the representation of the gods as tangible beings and with more human gestures.

Lysippus had a brother, Lysistratus, also a sculptor, who renewed, with realistic intent, the art of portraiture.

Already in Hellenistic art, the innovation of the ideas introduced by Lysippus and others such as Praxiteles, Scopas or Apelles, led to an exasperation of the subjects and subjects to be sculpted.

Statues were in fact made, works, with subjects that, at times, could be considered unpleasant, because it had been assimilated by all the idea that the author, the artist, is the one who succeeds with his courage, his talent and his genius, to give beauty, vitality and fascination to the work and not the beauty of the subject to condition the artist in the production of the work.

An example that has come down to us is the Roman copy of a Greek statue of that period: an old and ugly lady, yet beautifully interpreted in its emotional and psychological aspect that the sculptor knew how to obtain from the marble.

The master and founder of this revolutionary theory was Lysippus, who intuited how the beauty of a work of art is relative. There is an aesthetic beauty of the subject, but it is fundamentally the courage of the artist who represents and interprets it that imprints the character of an artistic work.

There is no better example than the sculpture of Hercules by Lysippus himself, represented in the effort to express all the strength and all the energy enclosed in his exasperated muscular mass, enormous, of a unique beauty and fascination that emanates from the plasticity and vivacity of the figure, in the athletic gesture.