Scopas (Greek, Σκόπας, Skópas) (ca. 380-330 B.C.) was a celebrated Greek classical sculptor and architect of the fourth century B.C. Praxiteles, Lysippus, and Scopas are the three great representative sculptors of the second phase of classicism.

He was born on the island of Paros in the Cyclades. He worked marble from the famous quarries of his native island. Scopas was very active in the period from 395 BC to 350 BC and worked almost exclusively in Greece. He was involved in the mausoleum of Halicarnassus. He was in charge of the reconstruction of the Temple of Athena Alea at Tegea (the Arcadia), destroyed by fire in 395 B.C.

Pausanias estimates that the building "far surpasses all the temples of the Peloponnesus for its arrangement and in particular for its stature" (VIII, 45, 4). Among the mythological themes addressed are the wild boar hunt of Calidon (façade pediment) and the combat of Achilles against Telephus (rear pediment). He also worked on the Temple of Artemis in Ephesus. He collaborated with Praxiteles, Leocares, Briaxis and Timoteo.

He is considered an artist to be included among the greats of sculpture, an innovator and a master. According to the historians of ancient Greek sculpture, Scopas was the inventor of the pathos style, so called because of the pathos (the feeling), well defined by the mournful expression with which it was usual to characterize the face of the statues themselves.

His works are very similar, in the construction of the compositions, to the style of Phidias although they seem very rigorous in form, in which the recourse to Polyclitus is noticeable.

Unlike Phidias, however, the sculpture of Scopas lacks the interpretative nature of human identity but is compensated with a particular feeling of pain, a tragedy, a pathos of living the human condition with all the drama of pain and suffering.

He was surely the first sculptor of the human mind, almost a sculptor-psychologist, an artist capable of stealing the feelings, the anguish, the expression of his subjects in order to infuse them into the marble. He was not content with representing the exterior of the subject but wanted at all costs to enter into the folds of the soul and discover all the hidden secrets: pain, sadness, disillusionment.

The example of the Maenad is both illuminating and tragic at the same time; the expressiveness of the woman's face, her movement, the drama of her features, is contagious and disturbing and moving at the same time.

Another work that is particularly significant of the style and emotive interpretation of Scopas' sculpture is the head of Herakles that once formed part of the west pediment of the Temple of Athena Alea at Tegea. Also in this case it is possible to notice the lack of refinement of the work, but in it in an intense way the reflection of the feeling, the soul, the pathos is lived.

The somatic features are slightly deformed, but with a great expressive charge, in the posture of the half-open mouth: almost a muffled cry, with the marks of the wrinkles that furrow the forehead, the eyes and the gaze, almost imploring, as in expectation, turned towards the sky, the depth of the gaze further accentuated by the empty orbits that contrast with the excessive protrusion of the eyebrows.

While in Phidias everything is built with his own precise spatial architecture, which never leaves gaps, Scopas fights with space, contrasts it, overcomes it, imposes himself on it by force, domesticating it and shaping it in his own artistic genius.

This particular interpretation is exemplified in the dancing Maenad (bacchante), where everything is movement, projection, dynamism, search for the infinite: basically, a true leap into the future. Even in less revolutionary works, such as the statue of Pothos, where movement is less accentuated, it is the play of light and chiaroscuro that give life to a sense of static movement.

Another characteristic of Scopas is that he does not polish his works, does not finish them, does not refine them. His sculptures, which have come down to us only through Roman copies of the imperial period, always maintained strong contrasts of light and shadow.

They can be considered the predecessors of Michelangelo's prisoners, where life, the soul of the works, already lives inside the block of marble; even barely sketched, the figure, the character, the vitality of the work comes out in all its energy, its vitality.

He influenced Lysippus and Hellenistic sculpture with his representations of Dionysian characteristics (passion, movement and violence). 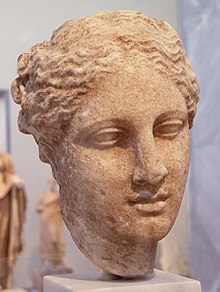 He realized a part of the mausoleum of Halicarnassus (today Budrum), built around 350 BC, taking care in particular of the bas-reliefs and sculpting the east side of the structure.

He also directed the work for the construction of the new building of the Temple of Athena Alea in Tegea, in Arcadia, where he worked personally and in particular on the pediments that are attached today. Various buildings that were part of the Sanctuary of the Great Gods of Samothrace are attributed to him.

Attributed to him are:

Works by Scopas are exhibited in the following museums: