Augustus Prima Porta is the name given to a white marble statue of the emperor Augustus, 2.07 m high. It was discovered on April 20, 1863 in the Villa ad Gallinas of Livia, located in Prima Porta, in the Municipio XX (Cassia Flaminia) of Rome. It is currently on display in Rome, in the Vatican Museum.

It is believed to be a copy made in 14 A.D. of a bronze original made in 20 B.C. The original bronze statue was certainly placed inside the Mausoleum of Augustus.

Augustus was the grand-nephew of Julius Caesar. He became emperor in 27 BC. This statue represents him as an Imperator, armored like a hero, a cupid on his right side sitting on a dolphin. On his cuirass is represented the historical scene of the restitution of a sign lost by Crassus in 53 BC, at the Battle of Carrhes. This sign was later placed in the temple of Mars Avenger in the Forum of Augustus.

This statue represents Augustus as imperator. He is wearing a short tunic, a cuirass and the paludamentum (purple coat). He has bare head and feet.

He is represented as a mature man of forty-three.

Here he adopts the chiasmus: he leans on his right leg and has his left leg behind (contrapposto: the weight of the body rests on one leg).

The representation of Augustus is inspired, without being an imitation, by the attitude of a Greek sculpture, Doryphorus of Polyclitus. This gives him a less static position than if he had both feet together. At his feet is a small Eros riding a dolphin.

The statue being a copy of a bronze statue, the sculptor had to add a support (the dolphin) to consolidate the statue. This is frequently found on marble statues.

The scepter in his left hand is a modern restoration and must have replaced a spear or perhaps the signs. The right arm raised horizontally is also modern.

The attitude is that of authoritative and calm speech. This statue represents the imperator haranguing his soldiers after the victory. This is how Roman politicians and military men were to be represented since the Etruscan-Roman Arringatore.

In ancient times, all statues and monuments were painted, but the color has disappeared. Researchers have found color pigments on the statue and propose painted representations.

This type is defined by the position and design of the frontal and secondary locks. Two locks curved to the right and one curved to the left form a very pronounced clip.

The other strands are combed to the right and to the left in the direction of the temples and sideburns, which they announce the movement.

The Prima Porta model is widely used, as are the Toulouse, Munich and Louvre models.

Compared to the other types, the hairstyle sticks closer to the skull and the movement of the locks has been simplified; for example, the La Alcudia type. The face is fuller and wider than the previous ones and is again similar to the Doryphorus of Polyclitus. 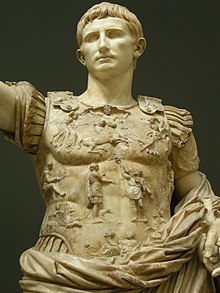 The composition of the cuirass is centered on a historical scene: the restitution in 20 B.C. of the ensigns lost by Crassus during the Battle of Carrhes in 53 B.C. These ensigns will later be exhibited in the temple of Mars Ultor (Mars Avenger).

In the center of the cuirass, there is the king of the Parthians, Phraates IV. He wears oriental pants and is dressed in the Persian Kandys. He holds in his hands one of the eagles that Crassus had lost.

The figure facing him is Tiberius the son-in-law of Augustus, who had been delegated to receive the trophies formerly taken from Crassus. He is helmeted and cuirassed and holds in his hand a sword or a staff of command and stretches his right arm to recover the sign.

At his feet is the Roman She-wolf.

High above is Caelus under a wind-blown veil that evokes the sky.

To the left is the god Sol in his quadriga, holding the reins and brandishing his whip.

On the right, there is Dawn with her pitcher of dew just in front of the goddess of the moon Luna who is veiled by the night that she illuminates with her torch.

In the vertical axis of Caelus, we find the earth goddess Tellus crowned with ears of corn. She is lying on the ground with her cornucopia. Two children are cuddled up to her.

To the left of Tellus appears Apollo riding a griffin. He can be recognized by the lyre in his hands. Opposite him is Diana riding a stag. She has a quiver on her back.

To the left of Tiberius, there is a seated woman representing Dalmatia or the Celtiberians, a Spanish people defeated by Agrippa in 21 B.C. She is holding a scabbard in her hands.

To the right of Phraates IV is a woman clutching an empty scabbard and a Gallic trumpet with a monster's head. At her feet is a boar, which confirms that this is Gaul. These two women are slumped over.

The personification of provinces, rivers or continents is common.

The ties of the breastplate are surmounted by sphinxes.

The Imperator, the marks of his power

The Romans created new types of statues like the statues covered with the toga. The armored statue is also a Roman creation.

One of the essential aims of Roman portrait sculpture is the representation of the imperial effigy which ensures the durability of a political function and attests to the presence of the emperor where he cannot be found in person. The statue has a power equal to that of the emperor himself.

One of the first acts of an emperor who has come to power is to have his portrait erected in all parts of the world to be displayed in temples and forums.

Double nature of the emperor: terrestrial and divine

Livia, his wife, must have wanted a portrait resembling her glorious husband: this explains the heaviness of the bottom of the statue and the slightly short legs. This heaviness is accentuated by the extremely tight folds of the chlamydia below the belt and by the voluminous mass of the garment which falls from the left arm.

The statue is indeed that of a man and not of a god. The folds are those of a real and warm fabric the paludamentum of the imperator and not the clothing of a god of Olympus. This statue glorifies him without divinizing him. The heroic nudity is a convention of Greek art. The Augustus of Prima Porta retains only the feet. The features of Augustus' physiognomy are individual, but the immobile gravity of his expression inspires a nobility that is more than human.

At the foot of the statue is a love mounted on a dolphin, which is an allusion to the ancestry of Venus. Indeed, Caesar claimed to have as ancestor Iule (or Ascanius), son of Aeneas and Creuse, brought to Italy by his father after the fall of Troy. By this lineage, Caesar claimed, when he pronounced the eulogy of his aunt Julia, an ancestry going back to Venus. He built a temple to Venus Genitrix to mark this.

Earthly and cosmic scope of the event

The Augustus of Prima Porta is the bearer of a story made with the support of the gods who surround on the armor the central event that is the return of an ensign. This manifestation of allegiance to the Roman power is considerable because it washes away the shame of a disaster that occurred 30 years before. The surrender of the sacred eagles of the Roman army confirms the universality of the Augustan peace. For this reason we find the personifications of the two defeated nations that frame the scene with Dalmatia or Spain and Gaul.

Several gods are present and surround the scene as if they were assisting in the triumph of Augustus' power, who obtains victories by his prestige alone. We find them in pairs:

The latter are celestial deities. They represent the march of the world:

Apollo is the patron god of Augustus and the fact that he is present reinforces the approval of the gods in his actions. This statue conveys the idea that the empire is a guarantee of peace, and that there is no pax romana without pax deorum, that is to say no peace without the agreement and support of the gods. There is no peace without the pietas of the man who put an end to civil wars because of his exceptional charisma which reflects everywhere on the world.

Conclusion of Augustus of Prima Porta

This marble statue representing Augustus as a cuirassed imperator is a work of propaganda. The subject which appears on the cuirass is an extremely popular one which brings out all the diplomatic power of Augustus able, in this case, to wash away a shame of the Romans by recovering the lost eagles. Augustus is supported by the gods, so he is in the place he deserves: the highest.

Through the representation of a specific diplomatic victory, the cuirass develops a rhetoric of greater magnitude: the event of the return of the ensigns is part of a discourse of return to the Golden Age. The peaceful management of a major problem by Augustus carries with it a symbolism developed on the cuirass: whatever the type of victory, military or diplomatic, the charisma of Augustus alone is enough to ensure its success.

Around the figure of the emperor, the two personifications of defeated countries, recall the Roman military power, and consequently the omnipotence of Augustus. But the emphasis on a victory different from a military victory indicates that Augustus is still above a simple warlike conqueror. His only existence guarantees the Peace.

The results obtained are due to his divine origin, the divine order has foreseen that it would be so. Each image carries a very strong ideological weight. The reference to Vulcan's shield in his composition marks the completion of the divine plan foreseen for his ancestor, making Augustus the new Aeneas, Apollo's earthly instrument for the return of the Golden Age in the universe4.

The Prima Porta style will often be used again.