The Barberini Faun is an ancient Greek marble statue of a sleeping satyr from the Hellenistic period, probably from the late second century BC. It is kept in the Glyptothek in Munich.

The statue represents a satyr, but one must be careful not to see it as a simple athlete: its pointed ears, its tail barely visible at the bottom of its back, its ivy crown and its nebride (panther skin) are not apparent at first glance.

He is lying on a rock, which suggests that he fell asleep in the middle of the woods, probably under the effect of wine. With his legs spread, his head tilted backwards, resting on his right arm folded behind it, he is in an unusual and complex position for the sculptor to execute - all the more so because originally, it seems that the right leg (modern restoration), was hanging and not folded.

The pose, however, is reminiscent of the drunken satyrs in the round on the Derveni crater, dating according to commentators from 350 or 330-332 BC. His body is that of an athlete, with powerful muscles: he has nothing in common with the feminine grace of Praxiteles' Satyr at rest.

The face is very expressive: the mouth is half-open, the hair in disorder, the features marked. It seems to represent a difficult sleep, probably due to alcohol.

The statue is 2.15 m high and made of marble. It is not known in what context it was placed: was it part of a group or an isolated statue? Was it a religious offering or a decorative work? Because of the power of expression, reminiscent of the Pergamon school, and the mastery of anatomical representation, it is generally agreed that this work belongs to Asia Minor at the end of the second century B.C.

No ancient copies of the Barberini Faun are known, but the existence of a bronze variant discovered in the Villa dei Papyri at Herculaneum predates the first century B.C. 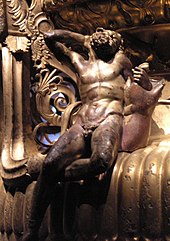 The statue was discovered during the pontificate of Urban VIII (1623-1643) at the Castel Sant'Angelo in Rome. It immediately entered the collections of the pope's family, the Barberinis, who gave it their name: it was the only major work to fall into their hands during the reign of their representative.

Tradition has it that Cardinal Maffeo Barberini commissioned Bernini to restore the statue, but after examining the archives in 1981, Francis Haskell and Nicholas Penny believe that there is no evidence that Bernini was in any way involved in the work.

The restorations, initially in stucco, were redone in 1679 by Giuseppe Giorgetti  and Lorenzo Ottoni, who reassigned the antique left leg and created the rock-like support. In the eighteenth century, the right leg was again restored in marble, and once again by Vincenzo Pacetti in 1799.

The statue quickly acquired notoriety. In 1700, it was cited as the "Faun of the Barberin palace", illustrating the "natural sleep", by the abbot Raguenet in his Monuments of Rome, or description of the most beautiful works that can be seen in Rome. It was sold by the Barberinis in the second half of the 18th century, during the great dispersion of their collections.

For a time it belonged to the sculptor and merchant Vincenzo Pacetti before being acquired in the 1810s by King Ludwig I of Bavaria, then crown prince, and installed in Munich in the Glyptothek, a museum specially created to house his new Greek sculpture collections. 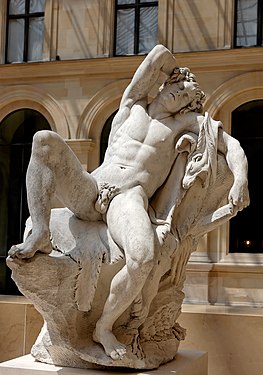 Many modern copies of the Barberini Faun are known, often the work of residents of the Villa Medici. Among these, we can mention :