The Colossus of Rhodes was a monumental bronze statue of the sun and city god Helios (ancient Greek Ἥλιος), over 30 meters high, which was completed around 292 BC after twelve years of construction and erected in the island capital of Rhodes. The colossal statue toppled about 227/226 BC as a result of an earthquake. It was already counted among the seven wonders of the world in antiquity.

The great statue of Helios was erected after the fortunate outcome of the siege of Rhodes (305-304 BC), which took place in the context of the disputes between the successors of Alexander the Great. From a historical point of view, the victory of the Rhodians against their powerful opponent Demetrios I Poliorketes would hardly have been achieved without the support of the Greek ruler of Egypt, Ptolemy I Soter.

The Rhodians themselves saw it differently. They erected several monuments in the city that recorded and celebrated the event for posterity. The most powerful of these was the colossal statue of Helios, which was placed in the city's main sanctuary, the Helios Sanctuary, and consecrated there.

The Rhodians believed that the sun god Helios, patron god of their city-state, had miraculously saved them from conquest by Demetrios Poliorketes. It was Helios, they say, who instructed the Rhodians to draw a concealed trench at night between the city wall and the main nine-story siege engine, Helepolis (ἑλέπολις "city destroyer").

When the siege engine advanced the next morning, it crashed into this ditch and closed with its tower a breach in the city wall that had already been made. Demetrios had then abandoned the siege of the city of Rhodes and left all his siege equipment to the Rhodians. The proceeds (300 talents of silver, or about 9 tons) would have been used by the Rhodians to finance the statue.

The question of the casting technique

It is clear from the ancient textual sources that the Colossus of Rhodes was made of cast bronze. A height of 70 cubits has survived, which is 30-35 meters (the exact cubit measurement is not known). The construction lasted over twelve years (about 304-292 BC).

The sculptor and head of the bronze casting workshop was Chares of Lindos, a student of Lysippos of Sikyon. The technique used in the casting workshop has to be reconstructed today. However, recent finds in Rhodes make it likely that the figure was cast in large individual pieces near its location.

Confusion is caused by the apparently detailed tradition of Philon of Byzantium on the casting technique. Philon claims that the figure was cast at the site floor by floor on top of each other. After completion of the second floor, it was hidden from the outside under a layer of earth, and then the second floor was cast on top of it, and so on.

Inside the figure, from the very beginning, iron scaffolding and stones were used to stabilize it and to help it rise. 500 talents of bronze (15 tons) and 300 talents of iron (about 9 tons) were used. The construction had devoured so much raw material that the then known copper ore sources threatened to dry up. The reason for the unusual casting method was that large individual parts could not have been transported.

Philon's text is probably the early attempt to reconstruct the casting technique of the giant figure, which was never written down and therefore already lost in antiquity. The author, himself no craftsman, mixes right with wrong. Thus, in antiquity, large castings could very well be transported, as they were lighter than the huge marble pieces used in temple construction.

Bronze casting in tiers is technically possible, but the archaeologically proven technique speaks against its use in Rhodes. Moreover, Philon's method would have involved the heaping up of a huge mountain. The overburden of this mountain would have to have left clear traces in Rhodes, which have not been encountered in eighty years of archaeological excavations in the city.

The Colossus of Rhodes is often mentioned in ancient literature - gladly as an example of exaggerated size and megalomania. The following anecdote also belongs in this context: "The Rhodians, who initially ordered a medium-sized statue from Chares, about 18 meters high, and fixed the price, changed the order and doubled the dimensions.

Chares realized too late that he should have asked for eight times the price instead of double. He went bankrupt on the order, which then drove him to suicide."

Ancient authors do not give any hint about the location of the Helios Colossus of Rhodes. Possibly this knowledge was too self-evident. However, it can be inferred from the historical context, because it was a dedicatory gift. The dedicatory inscription is probably preserved in the Anthologia Palatina.

The most monumental dedicatory gift ever set up by the Rhodians to their god can only have stood in the most important sanctuary of the city-state, the sanctuary of Helios. Such dedications are also traditional in the sanctuaries of other Greek city-states.

However, the location of the Helios sanctuary of Rhodes is unknown until now. Various proposals have been made: on the mole of St. Nicholas (Wolfram Hoepfner, see below), on the Acropolis (19th century), on the site of the medieval Grand Master's Palace on the slope of the Acropolis (in the meantime, already discarded).

Although the site was excavated in 1938 and prepared as an archaeological park, it has not yet been studied in detail. The proof of the localization is pending.

Destruction of Colossus of Rhodes

A powerful earthquake, now dated to 227/226 B.C., which caused great destruction in the city, also brought down the Colossus of Rhodes; one source says that the quake caused it to buckle at the knees. According to Pliny the Elder, the statue lasted only 66 years, making it the shortest-lived of the seven wonders of the world.

After this earthquake, Rhodes received financial support from all over Greece. A king, perhaps Ptolemy III Euergetes, also pledged funds to have the colossus rebuilt. However, the Rhodians left the bronze pieces for fear of a new fall. According to Pliny, an oracle was the reason. In a scholion, for the proverb "An evil that lies well should not be moved from its place" the lying colossus is cited as an explanatory example.

For about 880 years, visitors to the sanctuary could still see the rubble. According to a description by Pliny the Elder, huge cavities gaped in the broken limbs and only very tall men were able to grasp the statue's thumb with their arms.

According to a tradition that apparently goes back to the lost chronicle of Theophilos of Edessa and survives with variations in Theophanes, Agapios of Hierapolis, and Michael Syrus, the Arabs under Muawiya, the commander of the ruling caliph Uthman ibn Affan and governor of Syria, collected (probably in 654) the metal of the statue when they briefly conquered the island.

The scrap metal is said to have been shipped to the Orient, where a Jewish merchant from Edessa bought it and, according to the account of Constantinos VII Porphyrogennetos, transported it away with 980 camels.

The Colossus of Rhodes in art 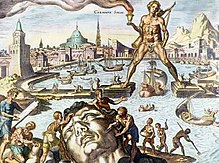 There is no ancient representation or description of the Colossus of Rhodes. One can only assume that Helios was depicted as a standing, naked young man with long curly hair and a halo of rays. It is very likely that his head was modeled after the coinage of the city-state of Rhodes, which had been minted in Rhodes since the late 5th century BC.

Since the Renaissance, the image of the splay-legged colossus above the entrance to the port of Rhodes has been widely circulated. It illustrates a legend that arose in crusader-ruled Rhodes of the late 14th century, probably under the early humanist Grand Master Jean Fernandez de Heredia. It may be assumed to have originated in a learned but mistaken interpretation of an ancient textual source.

The Knights of St. John told Christian pilgrims who stopped in Rhodes on their journey to the Holy Land that there had once been a huge idol in Rhodes that stood with one foot on the end of the St. Nicholas pier and the other on the end of the mill pier. It was so big that ships of any size could pass under its legs into the harbor. According to this legend, the Colossus of Rhodes stood with its feet on the ends of the ancient piers and took a step of about 750 meters.

The legend reached the West with the Christian pilgrims. In 1554 André Thevet in Lyon published for the first time a picture of the splay-legged harbor guard (Cosmographie du Levant). However, the best known to this day is the drawing by Maarten van Heemskerck engraved by Philipp Galle in 1572 (Colossus Solis, in Octo Mundi Miracula), which was subsequently frequently copied and varied.

Van Heemskerck introduced the attribute of the vessel with the flame in the right hand of the colossus into the picture. It is true that in the 18th century doubts were raised about the accuracy of the legend. The architect Johann Bernhard Fischer von Erlach (Entwurf einer historischen Architektur, Vienna 1721), for example, noted that with a 70 cubit high statue the step could not be as wide as the wording of the legend suggested.

Nevertheless, he too drew a picture in the tradition of van Heemskerck. The scholar Anne-Claude-Philippe, Comte de Caylus noted in 1752 that the legend and ancient tradition did not coincide. This did not affect the impact of the legend and its illustrations until well into the 19th century.

Almost all souvenirs of the Colossus made in Rhodes today go back to the illustration of the draftsman P. J. Witdoeck in B. E. A. Rottiers of 1830 (Descriptions des Monuments de Rhodes). A copy of this book is owned by the Department of Antiquities of Rhodes. This representation incorporated rational considerations such as that the firepot must be assumed to be in the central axis of the figure, i.e. above the head, for static reasons.

The oldest reconstruction of the Colossus of Rhodes as a still standing figure was published in 1939 by A. Gabriel. In modern illustrations of the Seven Wonders of the World, however, the reconstruction by H. Maryon from 1956 is often used.

Italian director Sergio Leone made the feature film The Colossus of Rhodes in 1961.

In the video game God of War 2, the player as Kratos fights against the Colossus awakened by Zeus at the beginning and manages to defeat it.

The word originally referred to a statue in human form without reference to size. The term entered Doric around 1000 BC and retained its meaning. Since the use of the word kolossós for the statue of Helios of Rhodes, it acquired the meaning "giant statue" (colossal statue).

As of December 2015, a group of architects planned to reconstruct the Colossus of Rhodes with a height of 150 meters. The cost would be 250 million euros, to be raised through crowdfunding, donations and some support from the Greek government.

As of 2018, nothing of the sort has happened and the former website of the project no longer exists.