The Diana of Versailles, also known as Diana the Huntress (Artemis), is an imperial Roman copy (first century) of a Greek bronze original from the fourth century BC, generally attributed to the Athenian sculptor Leochares.

The work depicts the goddess Artemis walking, her hand resting on the antlers of a small modern deer. The eponymous copy, which is also the best preserved, is in the collections of the Louvre Museum under the number Ma 589.

Discovery of Diana of Versailles

Probably discovered in the Nemi region of Italy, the Louvre statue was given to Henry II of France by Pope Paul IV in 1556. It was installed in the queen's garden at the Château de Fontainebleau and became immediately popular. In 1602, at the request of Henry IV, Barthélemy Prieur restored it and added a smaller-than-life stag, thus transforming the statue into Diana the Huntress.

The group was then transferred to the Louvre Palace in the Salle des Antiques - now the Salle des Caryatides, where it still stands - while in Fontainebleau it was replaced by a bronze print made by Prieur.

During the reign of Louis XIV, the group moved again, this time to the Hall of Mirrors at the Palace of Versailles, from which it takes its current name of "Diane de Versailles". Finally, in 1798, the Convention decreed its return to the Louvre. In 1802, it was again restored by Bernard Lange.

Description of Diana of Versailles

The Versailles statue, in marble, represents a larger-than-life Artemis: she measures 2 meters. Seized in full march, she advances the left foot, only the tip of the right foot, which is thrown back, touches the ground. Her right hand grasps an arrow in her quiver slung over her right shoulder.

The left arm is largely restored; the left hand holds a bow (fragmentary) and rests on the antlers of a stag (modern addition). Thus, the movement of the shoulders, oriented to the right, is the opposite of that of the hips, oriented to the left, in an X-shaped composition. A tree trunk serves as a prop against the left leg, indicating that the prototype must have been made of bronze.

Artemis is crowned with a diadem, her wavy hair tied at the back of her neck. She is wearing sandals, a chiton (tunic) and a himation (cloak) wrapped around her waist and slung over her left shoulder, a detail found on most Greek or Roman statues of Artemis.

Diana of Versailles Copies and variants

Numerous copies of the Diana of Versailles type are known. A relatively well-preserved copy is in the collections of the National Archaeological Museum in Athens: the goddess is not wearing sandals but boots; her right hand rests on a fragmentary stag, under which a smaller dog is running. The chiton bears traces of polychromy: it was painted in red and yellow.

The Leptis type, whose eponymous copy is kept in the Tripoli Museum, is very close to the one in Versailles. The general attitude is the same, but the stag is replaced by a hound. Several copies are related to this type rather than to the Versailles type, which explains why it is sometimes called the "Versailles-Leptis Magna type.

During the restoration of the Hall of Mirrors in 2004-2007, a reconstituted marble cast of Diana was put back in place.

A copy was also displayed on the mantelpiece of the Titanic's Grand Salon. It was located on the wreck, but was not found during subsequent expeditions, suggesting that it was stolen during the excavations.

A copy is also in the National Public Museum of Cherchell in Algeria. 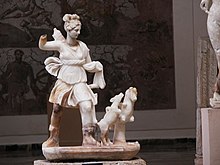 The prototype has long been attributed to Leochares on the basis of a comparison with the Apollo of Belvedere (in the Pio-Clementino Museum in the Vatican), with which the Artemis shares the walking representation and the X-shaped composition. The styles are also similar.

The comparison was made as early as the seventeenth century; it has been suggested that the two statues formed a pair, representing for example the massacre of the Niobids, even though none of the specimens of the Artemis type has been found with an Apollo, of any type. However, the attribution of the Apollo is itself open to question. Moreover, no walking Artemis is mentioned in the Leochares repertoire.

More recently, it has been proposed to attribute the work to Praxiteles, based on the short chiton worn by the goddess: this is not a garment appropriate for hunting. Rather, it would be the κροκωτός / krokôtós, i.e., the saffron-colored dress worn by the "bears" (servants of the cult) of Artemis at Brauron.

The specific diadem worn by the Artemis of Versailles would also be attached to this cult. However, we know from Pausanias that Praxiteles is the author of a statue of Artemis Brauronia located on the Acropolis in Athens. Traditionally, she was recognized in the Diana of Gabies, but the Praxitelian attribution of the latter has been abandoned.

Just as Praxiteles was the first to depict Aphrodite naked (in the Aphrodite of Knidos), he would have been the first to show Artemis with a short garment.

The centrifugal composition, characteristic of the early Hellenistic period, would allow the original work to be dated to around 330 B.C. However, a study of the design of the sandals on the various examples of the Versailles-Leptis Magna type seems to preclude dating the prototype before the first century B.C., or even later.

However, the various Artemisias do not appear to have been made in the first century B.C. However, not all the different Artemis wear sandals, and they are always Roman copies from the imperial period. It is therefore difficult to conclude on this basis alone. Finally, the art historian Brunilde Sismondo Ridgway also considers the attributions to Leochares or Praxiteles to be doubtful.