The Ecstasy of St. Teresa (or St. Teresa in Ecstasy or Transverberation of St. Teresa) is a marble sculpture by Gian Lorenzo Bernini, which depicts the transverberation of Teresa of Avila. The work is the central group in the setting of the Cornaro Chapel of Santa Maria della Vittoria in Rome, whose architecture, construction and decoration Bernini designed entirely.

History of Ecstasy of St Theresa 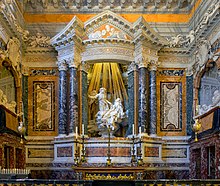 The work was completed in 1652 for the then exorbitant sum of 12,000 ecus and was carried out under the supervision of Bernini, then in his maturity, during the pontificate of Innocent X, at a time when the sculptor's participation in the insane expenses incurred for his debaucheries by the previous Pope Urban VIII (Barberini) had deprived him of pontifical support.

Cardinal Federico Cornaro, son of a noble Venetian family, had chosen the church of the Discalced Carmelites as his funeral chapel. The chapel chosen showed St. Paul in ecstasy, which the Cardinal had replaced with the one who had recently been canonized (1622) and was the first Carmelite nun to have been so.

The chapel, the pinnacle of Baroque architecture, is an explosion of polychrome marble, gilded metal and details of skilfully studied plasticity.

The zenithal light is filtered lightly through a window above Teresa and is directed by golden rays towards the white marble statue which reflects it in the swooning folds and surplices of the robe. The frescoed dome gives the illusion of a sky filled with cherubs with the light descending from the Holy Spirit symbolized by a dove.

The chapel is mentioned in the novel Angels and Demons by Dan Brown, as well as in the film that adapted it to the cinema.

Iconography of Ecstasy of St Theresa

The two main characters of the sculpture originate from a passage written by Teresa of Avila in her autobiography, Life of St. Teresa of Jesus (1515-1582), a cloistered mystic, Discalced Carmelite, reformer and nun (1622). It describes divine visions, including one in which she saw a young and beautiful angel standing beside her.

The pain was so great that it made me groan; and yet the sweetness of this excessive pain was such that it was impossible for me to want to be rid of it. The soul is satisfied at such a time only by God and Him alone. The pain is not physical, but spiritual, even if the body has its part in it. It is such a sweet caress of love which is then made between the soul and God, that I beg God in His goodness to make him experience it who can believe that I am lying. "

The position of Saint Therese's body and the expression of her face have led some observers, such as Jacques Lacan, to explain them as the sign of a moment of sexual ecstasy " for Saint Therese, well, let's say the word anyway... and moreover you only have to go and look at a certain church in Rome at Bernini's statue to understand immediately... well, what is it: that she is enjoying herself, no doubt about it! And of what does she enjoy?

It is clear that the essential testimony of the mysticism is precisely to say that: that they feel it but that they do not know anything about it. The specialists of the baroque put in doubt this theory.

Thus Nicolas Mattei, in his conference on the baroque art, Saint Theresa of Avila by Bernini in December 2009, declares: "She enjoys, Theresa, said Lacan! Our time, excessively marked by Freud and the psychoanalysis, a psychoanalysis too often democratized not to say of bazaar, can see here only one ecstasy all there is of more physical. It is however about a mystical ecstasy ".