Hermes and the Infant Dionysus Hermes with the child Dionysus is a Greek marble sculpture with a height of 213 centimeters that is in the Archaeological Museum of Olympia. Its authorship is attributed to the sculptor Praxiteles of the late classical period or, according to other authors, it would be a copy of the first century of an original by the same artist of 350-330 B.C.

It was found in 1877 among the ruins of the temple dedicated to Hera where it served as ornamentation. It is a free-standing sculptural work, inspired by Greek mythology.

The concepts of Greek profile, Greek nose and Praxitelian curve have become a model of classical beauty in the art of sculpture.

Discovery of Hermes and the Infant Dionysus 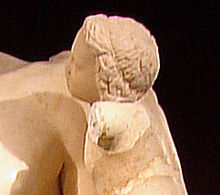 The Greek state signed an agreement with Germany in 1874 for archaeological exploration at Olympia. Excavations by a German team began in 1875 under the direction of Ernst Curtius. On May 8, 1877 it was found in the ruins of the same temple of Heraeum where Pausanias saw it.

It was a nude corporeal sculpture (head, trunk, legs and left arm) representing a young man leaning on a tree trunk covered with a cloth cloth. It was protected by a thick layer of clay, although in an exceptional state of preservation.

Six other different discoveries of missing pieces were made in other excavation campaigns, until the sculptural group was formed as it is currently on display.

The figure of Hermes was missing the right forearm, two fingers of the left hand, the two legs from the knees, the left foot and the sexual attributes; the child Dionysus was missing his arms (except for the right hand resting on the back of Hermes) and the tip of the right foot. Finally, it was not possible to locate a large part of the tree and the pedestal.

Authorof Hermes and the Infant Dionysus

Praxiteles (in ancient Greek Πραξιτέλης) was one of the great Greek sculptors, who lived and was an outstanding representative of the Attic school during the central part of the 4th century B.C. He was a renowned sculptor in his time and also later the Romans were connoisseurs and admirers of his work.

His biography is quite unknown; in this sense the sources are even contradictory. He belonged to a dynasty of sculptors: his grandfather had worked with Phidias on the Acropolis of Athens.

Praxiteles (named after his grandfather) was the son of the sculptor Cephisodotus the Elder, whose original sculpture is the group of Irene and Pluto called Peace and Wealth, a work in which there may have been some inspiration for the Hermes with the child Dionysus.

Praxiteles was born around 400 B.C. It is also known that he worked in Athens, where he had a workshop, and that he was of the same period as Lysippus and Scopas of Paros, with whom he formed the trio of sculptors most representative of the second phase of classicism.

It is believed that he maintained relations with the Thespian courtesan Phryne, who would have modeled her sculpture on the Aphrodite of Cnidus. Pliny the Elder places his artistic peak after the 104th Olympiad (that is, in 364-361 B.C.) and notes that Euphranor was a contemporary sculptor.

Few works can be considered original by Praxiteles and doubts remain about his authorship: Hermes with Dionysus Child is generally considered to be an original work by the artist.

Dating and debate about his authorship

Since its discovery the work is considered to be the same representation of Hermes with Dionysus child that Pausanias saw in the temple of Hera at Olympia:" the ones I have enumerated are of ivory and gold, and some time later they offered others in the Hereon: a stone Hermes carrying Dionysus child and is the work of Praxiteles. " (Description of Greece, V, 17, 3).

Georg Treu, one of the discoverers, wrote enthusiastically: "I do not know of all the works of art that I have seen, none that can compare with it. There is no doubt that it is an original by Praxiteles". And Ernst Curtius, another archaeologist wrote to his brother on the occasion of the discovery telling him that it was: "The crowning glory of all the finds made at Olympia".

The sculptural group has great technical virtuosity and the characteristic "Praxitelian curve": a gentle curvature at Hermes' hip, achieved by resting his arm on a tree trunk.

The expression of his face is nostalgic and with a mannered appearance typical of Praxiteles, the flexibility, the youthful air of the god and the treatment of the muscles, without doubt, is close to the Saurochthonous Apollo of the Louvre Museum, as is also the case with the Satyr in repose in the Capitoline Museums, and the Aphrodite of Cnidus in the Altemps Palace in Rome.

However, it is the only specimen of this type, unlike the numerous copies that exist of the Satyr in repose and the Aphrodite of Cnidus.

On the other hand, the Roman author Pliny the Elder (Natural History vi, 66) attributed to Cephisodotus the Elder (who was possibly Praxiteles' father) a sculpture of Hermes with infant Dionysus, but of bronze. Pliny does not mention any marble one.

In favor of the Praxitellian thesis, or at least, that it is a second Greek original of the classics, the material has been presented as evidence: although all known specimens are of Pentelic Olympia marble, the Hermes is of Paros marble.

But some stylistic peculiarities seem incompatible with a dating of the 4th century B.C. Thus, contrary to the usual sculptures of the time, the hair is mostly done with the trephine; the chisel is only used in some places. However, it may be an innovation of Praxiteles.

Likewise, the finishing of the tree trunk is done with a flat chisel and not with the gradina which was an unusual form in the 4th century. The design of the sandals is more common in the Hellenistic period than in the classical period.

Finally, the polishing of the statue is characteristic of the marbles of the Roman imperial period. It is possible that the results of the polishing action is a study applied in preparation for receiving the paint, of which relatively little is known.

All this series of elements has led to propose other authorships instead of Praxiteles. The Hermes could be the work of a sculptor of the Hellenistic period close to the Roman. The Praxitelian attribution would be due to an error or confusion of Pausanias.

Carls Blümel, proposes a solution that allows the testimony of Pausanias and a late attribution; Hermes is the work of a "Praxiteles" but is, in fact, a sculptor of the second century BC, the signature of which was found in the excavations of Pergamon.

Controversy continues regarding the dating of the work, which in 1877 was found in excavations carried out by a German team in Olympia, in the ruins of the same temple where Pausanias saw it, but some stylistic features seem to be of a later period so that some experts believe it is a copy of the first century of an original by Praxiteles of the fourth century BC.

Hermes and the Infant Dionysus Subject

According to Greek mythology, Dionysus is the son of the god Zeus and Semele, a mortal, daughter of Cadmus, king of Thebes. The god's wife, Hera, jealous of the encounters, suggested to Semele to leave her relationship with Zeus, but, not achieving her purpose, she decided that the best thing would be to punish the young lover.

In this regard, Hera told her that, in truth, she was being deceived, because her real lover was not Zeus, but an ordinary man who pretended to be the divinity, taking advantage of her naivety. In view of this, and if she wanted to be sure, she should ask him to give her some proof of his power and immortality.

Having said this, Semele did not hesitate to ask Zeus to show her all his power, and Zeus, happy because by that time she was already pregnant, promised her that he would give her everything she wanted. She, haunted by Hera's words, implored him to appear to her in all his splendor and, although the god tried to persuade her to ask for something else, he could not find a way to convince her.

This being impossible and, apparently, as she asked Zeus to show himself in all his magnificence, the thunderbolts and fire that he gave off ended up incinerating Semele; then the god who knew that Semele was pregnant, extracted the fetus she was carrying inside her and sewed it into her leg.

After six months, according to the myth, Dionysus was born, which is why Dionysus is known as "the twice-born god". Newborn was entrusted to the custody of Hermes, also son of Zeus, to protect him against Hera and to take him for his care to Atamante and his wife Ino.

The group is carved from a block of Paros marble of the highest quality. Hermes measures between 210 and 213 centimeters, and the complete work with the base about 370 centimeters.

The right foot of Hermes is attached to a piece of plinth, which has holes that do not fit into the crown of the base, suggesting that it reflects changes made to the statue at some time. Other parts of the group are similarly separated, and the tree trunk is attached to Hermes' hip by the placement of a bridge.

The face and torso of Hermes are shown with a perfect, almost brilliant polish "to which," John Boardman jokingly comments, "generations of temple cleaners have contributed. " On the back, however, there are the marks of scraping and chisel strokes, and the rest of the sculpture is only partially polished.

On the hair, since its discovery, there are small traces of cinnabar, a red-colored mercury sulfide compound, which is probably not a real color, but a preparation for gilding.

The color is found on the straps of the original foot sandal, which also has traces of gilding; in addition, the sandal has a drawing of Heracles, which was done in paint, and which is born in the carved motif of the straps between the toes. The eyes and lips were probably red.

In the sculpture, efforts have been made for a restoration of the highest quality and respecting the original work. Thus, in the version preserved in the museum of Olympia, Hermes does not have the classical attributes of wearing a petasos on his head, or wearing winged sandals.

That he wore an ornament of a grass crown seems most likely. With the left hand he held another attribute: probably a caduceus. In general, the missing raised right arm of Hermes has suggested various interpretations. It seems that the group is the representation of the mythological episode of Hermes when he carried Dionysus to the nymphs on the mountain Nyssa.

Along the way, Hermes, in order to distract the little Dionysus, waves an object with his right hand. It is therefore assumed that Hermes was holding a musical instrument in his hand, or it could also be that he was holding a bunch of grapes.

Hermes and the Infant Dionysus Conclusions 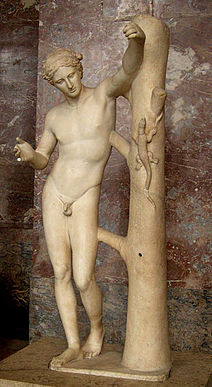