The Kouros of Kroisos or Kouros of Anavyssos is an ancient Greek marble statue from the Archaic period, circa 540/510 BC, depicting a naked young man (ancient Greek κοῦρος / koũros, fr. kouros) with a funerary purpose. It is kept in the National Archaeological Museum of Athens (no. 3851).

The statue was discovered in 1936, during clandestine excavations in the necropolis of Anavyssos, a coastal locality 34 km southeast of Athens (demesne of Saronicum); then the base of the statue bearing the inscription was found in 1938.

The statue had miraculously remained almost intact: only a few small fragments were missing and the left foot was broken. It was sawn into several pieces to be sent illegally to France, but it was recovered by Greece in 19371 to join the National Archaeological Museum in Athens. 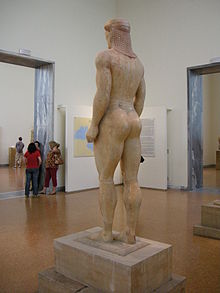 The kouros of Kroisos, made of Paros marble, measures 1.94 m. The statue represents a naked young man, in a frontal position, his left foot slightly forward, his arms at his sides. His hairstyle is typical of the kouroi of the time: the hair, curled on the forehead, is held back by a headband and falls in long braided strands behind the shoulders. The face displays the archaic smile typical of the statues of this period.

The inscription in the form of an epigram, engraved in four lines on a base associated with the statue, is addressed to the passerby: it gives the name of the dead man: Κροῖσος, Kroisos (which can also be francized as Croesus), the circumstances of his death (he is a soldier who died in battle), and indicates the memorial function of the statue:

to be read as:

"Stop and weep before the grave of Kroisos who died, killed by savage Ares while fighting in the front line ".

This kouros can be compared to others of the same period, such as the large Kouros of Sounion (no. 2720, National Archaeological Museum) which has a tighter waist and more stylized anatomical details, represented by lines or incisions that date it to the years 610/590 BC, or the Kouros of Volomandra (n° 1906, national archaeological museum, around 550 BC)

which shows more rounded forms, anatomical details treated in reliefs more modelled, close to the Kouros of Kroisos, but of an invoice which seems less mastered.

The kouros that seems to be closest to the Kroisos Kouros is the so-called Getty kouros, exhibited at the J. Paul Getty Museum in Malibu, but some experts question its authenticity. 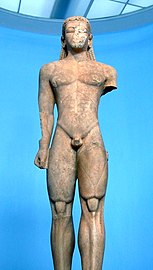 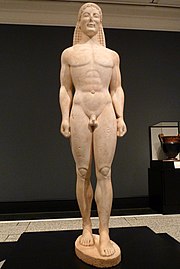 It remains to be seen whether the fifteen or so archaic kouroi that have come down to us, whose commemorative funerary function is beyond doubt, were conceived on a standard impersonal and symbolic model, or whether they sought, despite the technical difficulty and artistic possibilities of the time, to represent a specific person, that of the deceased.

On the other hand, their magical function and their relation to a sublimated representation of Apollo open the field to numerous interpretations that divide archaeologists and art history researchers.