The Moschophore or Moscophore (ancient Greek: μοσχοφόρος calf-bearer), is an archaic Greek statue, dated 570/550 BC, kept in the Acropolis Museum in Athens. It represents a faithful man carrying on his shoulders a young calf destined for sacrifice.

This work differs from the usual art of "kouroi". 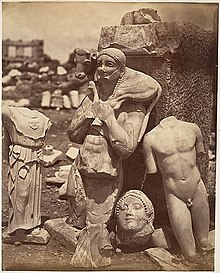 The statue was brought to light in 1863 during the foundation works of the ancient Acropolis Museum in Athens. Its base was then discovered in 1887. It was buried in a level of rubble (the "Perserschutt") that corresponds to the destruction of the Second Medieval War and the looting of the Acropolis in 480 BC. With it were found many fragments, among which the Athena Angelenos and the Ephebe of Critios.

The statue, which measures about 97 cm in its current state, was partially completed with fragments found on site. It is made of Hymette marble on a limestone base. An estimate of its original state gives it a height of about 1.65 m, slightly less than a life-size representation.

It shows a young man carrying a sacrificial calf on his shoulders. It probably comes from the first Parthenon, deposited as an ex-voto. The dedicatory name of Rhombos is engraved on the base in an inscription from right to left: "(Ρ)ΟΜΒΟΣ ΑΝΕΘΕΚΕΝ ΠΑΛΟΥ ΥΙΟΣ" (Rhombos, son of Palos, dedicated it).

The inscription on this base informs that this statue was dedicated by someone named Rhombos (perhaps Kombos or Bombos; the beginning of the name is missing) to Athena, the goddess of wisdom.

This suggests that the sponsor was a very wealthy man and a prominent citizen of Attica who attributed his own likeness to Athena. He has a calf on his shoulders which represents the sacrificial offering he is about to give to the goddess. The Moschophore is not a kouros, because he has a beard.

The condition of the statue is poor and broken in some areas. The legs are missing below the knees. The hands are broken. The genitals and left thigh have separated from the entire sculpture.

The lower half of the face (the chin area) is chipped. The foot with a pedestal is connected to the base. The calf is well preserved, while the eyes of the wearer are missing. The rest of the sculpture is in good condition.

The statue is a good example of the late Archaic period in Greece. The frontal pose is treated in a hieratic manner reminiscent of Egyptian sculpture. The left leg is slightly forward, the body is covered with a thin cloth, a chlamydia, and the face bears the characteristic archaic smile.

The statue is close to the Rampine Rider and shows a great mastery of the artist who begins to infuse his sculpture with a certain humanity, announcing the beginnings of severe classical art. He has a thick beard, symbol of adulthood. He wears a thin cape.

The nudity of the sculpture is the main aspect of the art because it adheres to the artistic conventions of the time. The cloak, on the other hand, depicts him as a respectable and recognized citizen. Looking at its form and style, this sculpture is typical in its composition of the early 6th century BC around 570 BC.