The Dying Galatian, sometimes called the Dying Gladiator or Galatian Capitolin (Italian: Galata Morente), is the Roman marble copy of a lost Greek original from the Hellenistic period (323-31 BC), probably executed in bronze, commissioned between 230 and 220 BC by Attalus I of Pergamon to commemorate his victory over the Galatians, the Celts or Gauls inhabiting Anatolia.

The original sculptor is said to be Epigonos of Pergamon, a court sculptor of the Attalid dynasty of Pergamon.

This ancient sculpture is exhibited in the Palazzo Nuovo (Rome) in the center of the Hall of the Gladiator, to which it gives its name; it is one of the most remarkable and famous works in the museum.

Until the twentieth century, the marble statue was generally known as the Dying Gladiator, assuming that it represented a wounded gladiator in a Roman amphitheater, especially given the popularity of Lord Byron's description. 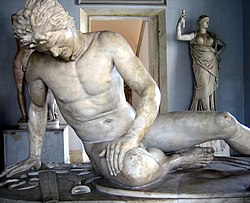 The white marble statue, which may have been originally painted, represents a wounded Gallic warrior (Galatian), slumped over, with a particularly remarkable realism and pathos in the treatment of his face, whose attributes are well highlighted: he is represented with an abundance of hair whose strands are out of order and a bushy moustache, characteristic features of the Galatians.

Completely naked, he wears a torque around his neck, a distinctive jewel of Celtic warriors. A bleeding sword wound is visible on the lower right of his chest. The wound, clearly visible, indicates the warrior's desire to return to the end of his resistance to pain.

He sits on his shield while his sword, belt and curved trumpet rest beside him. The hilt of the sword bears a lion's head. The present base is a 17th century addition.

The statue confirms ancient sources relating to the mode of combat of the ancient Celts, Gauls or Galatians; Julius Caesar relates in his Commentaries on the Gallic War that his opponents went into battle completely naked. According to the Greek historian Polybius, describing the ranks of a Gallic army, all the warriors wore a torque.

The statue serves on the one hand to commemorate the Celtic defeat while demonstrating the strength of the victorious people but, beyond that, it appears as a testimony to the courage of worthy adversaries.

History of The Dying Gaul 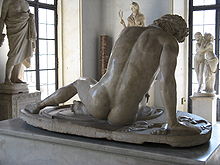 The Dying Galatian is one of the most famous works of antiquity to have come down to us. The present base was added after its discovery. The identity of the sculptor is unknown, but it has been suggested that a certain Epigonos of Pergamon, an Aulic sculptor of the Attalid dynasty, may have been the author.

This representation could have belonged to the great votive monument of the Pergamene period that Attalus I had placed along the terrace of the temple of Athena Nikephoros, to celebrate the victory over the Galatians. The hypothesis that the copy is dated to the Caesarian period, but also that it could be a direct copy, or even the Pergamenian original, has been proposed recently.

It is believed to have been discovered in the early seventeenth century during the excavations of the foundations of the Villa Ludovisi (Sallustus' gardens in antiquity), commissioned by Cardinal Ludovico Ludovisi, nephew of Pope Gregory XV.

Numerous other antiquities, including the Ludovisi Throne, were subsequently discovered on the site in the late nineteenth century when the Ludovisi Family estate was redeveloped and rebuilt. It is first recorded in a 1623 inventory of the Ludovisi family collections and in 1633 in the Palazzo Grande, part of the Villa.

Pope Clement VII acquired it in 1734 along with the statues from the Ludovisi collection for the Capitoline Museums.

Napoleon I seized the statue in 1797 during the Italian Campaign (1796-1797) and, under the terms of the Treaty of Tolentino, brought it back to Paris, where it was exhibited in the Louvre Museum with other Italian works of art until 1816, when it was returned to Rome. It can still be seen in the Capitoline Museums.

The Dying Gaul's Representation of the Celts

The statue serves as both a reminder of the Celts' defeat, demonstrating the power of the people who defeated them, and a memorial to their bravery as worthy adversaries.

The statue may also provide evidence to corroborate ancient accounts of fighting style; Diodorus of Sicily reported that "some of them have iron breastplates or chain mail while others fight naked. " Polybius wrote an evocative account of Galatian tactics against a Roman army at the Battle of Telamon in 225 BC:

"The Insubrious and Boii wore pants and light cloaks, but the Gaesatae, in their love of glory and spirit of defiance, had abandoned their clothes and taken up a position in front of the entire army naked and carrying only their weapons.... The appearance of these naked warriors was a terrifying sight, for they were all men of splendid physique and in the prime of life."

The Roman historian Titus Livy reported that the Celts of Asia Minor fought naked and that their wounds were clearly visible on the whiteness of their bodies. The Greek historian Denys of Halicarnassus considered this a foolish tactic:

"Our enemies fight naked. What injury could their long hair, their fierce looks, their clashing arms do us? They are only symbols of barbaric boasting.

The representation of this Galatian as naked can also be intended to lend him the dignity of the heroic nude or pathetic nudity. It was not uncommon for Greek warriors to be depicted as heroic nudes as well, as evidenced by the pedimented sculptures in the temple of Aphaia at Aegina.

The message conveyed by the sculpture, as HW Janson comments, is that "they knew how to die, barbarians that they were ".

Influence of The Dying Gaul

The Dying Galatian became one of the most famous works to survive from antiquity and was engraved and copied endlessly by artists, for whom it was a classic model for the depiction of strong emotion. It shows signs of repair, with the head appearing to have been broken at the neck, although it is unclear whether the repairs were made in Roman times or after the statue was rediscovered in the seventeenth century.

The left leg was found to be in good condition when the statue was found. When discovered, the left leg was in three pieces. They are now pinned together, with the pin hidden by the left patella. The "spiked" hair on the Galatian is a seventeenth-century reworking of longer hair found broken at the time of discovery. The artistic quality and expressiveness of the statue is very good.

The artistic quality and expressive pathos of the statue led to a certain infatuation with the subject among the educated classes of the seventeenth and eighteenth centuries. It was widely copied, on royal commissions, for a public of scholars or rich collectors who wanted to own their own reproduction of the dying Gaul. Copies of the statue in miniature for ornament or as paperweights were made for a less affluent public.

During this period, some people misinterpreted the theme of the statue as a wounded gladiator, leading to the appearance of several alternative - and deeply incorrect - names such as the "dead" or "wounded" gladiator, the "Roman gladiator" or the "dying Mirmillon" because one of the objects scattered beside the figure is a horn.

The artistic quality and expressive pathos of the statue were much admired by the educated classes of the seventeenth and eighteenth centuries and were a must-see sight on the Grand Tour of Europe undertaken by the young men of the time. Lord Byron was one such visitor, commemorating the statue in his poem The Pilgrimage of Childe Harold :

"I see before me the Gladiator lie
He leans upon his hand-his manly brow
Consents to death, but conquers agony,
And his drooped head sinks gradually low-
And through his side, the last drops, ebbing slow
From the red gash, fall heavy, one by one..."

From December 12, 2013 through March 16, 2014, the work was on view in the main rotunda of the West Wing of the National Gallery of Art in Washington, DC (District of Columbia). This temporary exhibition was the first since its return to Italy in the second decade of the nineteenth century.

It was widely copied, with kings, academics, and wealthy landowners commissioning their own reproductions of the Dying Gaul, a black marble copy of which for the Duke of Northumberland stands in the entrance hall of Syon Park House Estate, designed by Robert Adam;

there are copies in several gardens in England, including Rousham House, Oxfordshire by Peter Scheemakers (1743), and Wilton House, Wiltshire (by Simon Vierpyl, before 1769). Thomas Jefferson wanted the original or a reproduction in Monticello, Virginia. Less affluent people could purchase miniature copies of the statue to use as ornaments and paperweights. Full size plaster copies were also studied by art students.

Copies of the statue can be seen in the Museum of Classical Archaeology at Cambridge University and the Courtauld Institute in London, in the park at Versailles (marble copy by Michel Mosnier, 1684), as well as in Berlin, Prague, Stockholm, and the Washington State Historical Society in Tacoma. The American hyperrealist sculptor John de Andrea created contemporary variants.

In the United States, copies are in the Washington State Historical Society in Tacoma, Washington, the Redwood Library, Newport, Rhode Island, and Assumption College in Worcester, Massachusetts.

A bronze copy entitled "Centurion" stands in front of the Mel Bailey Criminal Justice Center in Birmingham, Alabama, in memory of the lives of the deceased police officers; this copy bears a pterygium but is otherwise identical.

The Royal Academy in London owned one, now in the Courtauld Institute in London. It also possessed a flayed figure in this pose, cast in the late eighteenth century from the body of an executed smuggler and nicknamed "Smugglerius" accordingly.

There is a bronze example on the gate of the walled garden at Iford Manor, Wiltshire, England. In the English market town of Brigg in Lincolnshire, The Dying Gladiator Inn has a copy, using the old name.

The College of Fine Arts of the University of the Philippines Diliman also has a copy, using the old name. There is also a copy in the Hermitage Museum in St. Petersburg, Russia, and one in the Telfair Museum of Art in Savannah, Georgia.

The Museum of Art and Circus Museum, Ringling Brothers Estate, Sarasota, Florida, has a life-size copy.

The William Humphreys Art Gallery in Kimberley, South Africa, also has a copy.

The residence of the French Ambassador to Cuba, located in the Miramar suburb of Havana, has a copy, at the back of the garden, behind the residence.

The Pinacoteca of São Paulo, in Brazil, has a bronze copy.