The Thinker (in French Le Penseur) is one of Auguste Rodin's most famous sculptures. The sculptor conceived this piece between 1881 and 1882 to decorate the tympanum of the sculptural ensemble The Gate of Hell, commissioned in 1880 by the French Ministry of Public Instruction and Fine Arts.

This would serve as the entrance to what would become the Musée des Arts Décoratifs in Paris.

Story of The Thinker

The sculpture was originally named The Poet, as it represented the Italian writer Dante Alighieri, author of the Divine Comedy, a literary work that served as one of the inspirations for the creation of The Door to Hell. In a letter sent to the critic Marcel Adam, he wrote:

The thinker has a story. In the past few days, I conceived the idea for The Gate of Hell. In front of the gate, sitting on a rock, Dante thinking about the plan of his poem. Behind him, Ugolino, Francesca, Paolo, all the characters of the Divine Comedy. This project was not realized. Thin, ascetic, Dante separated from the whole would have made no sense. Guided by my first inspiration I conceived another thinker, a naked man, sitting on a rock, his feet drawn under him, his fist against his chin, him dreaming. Fertile thought slowly elaborates itself inside his brain. He is no longer a dreamer, he is a creator.

According to researcher François Blanchètiere, The poet represents a tortured body and at the same time a free-spirited man determined to transcend through poetry. Also of Dantesque vocation, the work personifies Minos, judge of the hells who in the Italian's work assigned the condemned to one of the nine circles according to their sins.

The Thinker belongs to the group of works made between 1880 and 1881, where Michelangelo's influence is particularly strong; Il Pensieroso and Jeremiah of the Sistine Chapel undoubtedly bear a resemblance to him.

For the pose of the figure - with the right elbow on the left leg - Rodin studied Jean-Baptiste Carpeaux's Ugolino, which was executed in 1862 and belongs to the collection of the Musée d'Orsay.

In the words of Octave Mirbeau, "his pose is somewhat reminiscent of Michelangelo's The Thinker, Dante is seated, with his torso leaning forward and his right arm resting on his left leg, which gives the body an inexpressibly tragic movement"; he was also based on the representation of Lorenzo de' Medici seated, the centerpiece of the Medici Chapel in the Basilica of San Lorenzo in Florence, Italy.

In Copenhagen he first presented the sculpture under the title The Poet, shortly after art critic Léon Gauchez commented to Rodin on the idea of a depiction of Dante without the characteristic attire: "A nude Dante is a heresy that deprives him of an admirable antithesis."

When the figure was exhibited in its original dimensions at the Monet-Rodin exhibition at the George Petit Gallery in 1889, Rodin stopped identifying it as Dante and titled it The Thinker; The Poet, Fragment of a Door.

Rodin referred to The Thinker's thinking in the following way:

What makes my thinker think is that he thinks not only with his brain, with his frown, with his distended nostrils and compressed lips, with every muscle in his arms, back, and legs, with his clenched fist and clenched toes.

Some commentators mention that The Thinker occupies in The Gate of Hell a position similar to the sacred figures of the Gothic portals; therefore, he is a judge and at the same time a prisoner in hell. It is a projection of the sculptor, of the artist in general, who confronts the critics of his time and whom he also judges.

In 1904, Gabriel Mourey, editor of the magazine Les Arts de la Vie, showed the sculptural work in the city of Paris and the fame of The Thinker spread from a minority interested in aesthetic questions to the international public. Gradually, Rodin became a public symbol of great importance. Mourey explained why The Thinker had been selected:

We chose this magnificent work from among all the others because he is no longer the poet suspended over the gulfs of sin and atonement, crushed by the piety and terror of the inflexibility of a dogma, he is no longer the exceptional being, the hero; he is our brother in suffering, in curiosity, in thought, in joy, the bitter joy of seeing and knowing; he is no longer a super human being, a predestined one, he is simply a man of all times

On April 21, 1906, The Thinker was installed in front of the Pantheon in Paris and remained there until 1922, when it was moved to the Rodin Museum.10

Foundries of The Thinker

Casting is the process of producing a bronze sculpture from the molds and genuine pieces of an artist. Rodin had his pieces cast by foundries such as Radier or Coubertin. The first casting of The Thinker in bronze was made in 1884, at the request of the Anglo-Greek collector and patron Constantine Alexander Ionides.

Unlike the models that the artist had previously made, this variant bore a Phrygian cap, a symbol of freethought and which during the Third French Republic alluded to democracy. This version was not shown during the author's lifetime.

At the end of April 1884, Ionides wrote to Rodin: "I am thinking of placing your thinker on a round table in the reception room, where he can be seen from all angles." This was the first known mention of The Thinker as a title, which did not become official until 1889, when the work was presented as a stand-alone piece in the joint exhibition with the Impressionist painter, Claude Monet at the Georges Petit Gallery.

Around 1902, Rodin decided to enlarge the sculpture and commissioned Henri Lebossé, who specialized in the use of the pantograph, to make it 180 cm high. The work was exhibited at the Paris Salon in 1904 to rave reviews.

While maintaining its place in the monumental ensemble of The Gate of Hell, The Thinker was shown separately, starting in 1888, thus becoming an autonomous work. Enlarged in 1904, it took on a monumental dimension that further increased its popularity.

The Thinker in the world 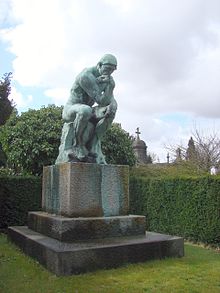 There are several castings of The Thinker around the world; some have been enlarged from the original and others of different proportions. All of these are known as multiple originals. It is possible to find some of them in the following places:

There is a version of the literary work The Flowers of Evil by Charles Baudelaire illustrated by Auguste Rodin between 1887 and 1888; it shows the Thinker in the poem Les Bijoux.