The Diadúmeno or Diadumeno is a statue designed by Polyclitus in the fifth century B.C. The original statue was made of metal, probably bronze, but today only copies of limestone and marble are preserved.

It depicts a Greek athlete girding on his head the ribbon of victory, whence the name διαδούμενος diadúmenos 'he who girded', which derives from the Greek term διαδέω diadéo 'to gird'.

He is still naked after the competition and raises his arms to tie the diadem, a ribbon-like band that identifies the winner and which in the original work from around 420 BC would be represented by a carved ribbon. 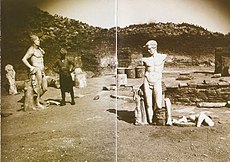 The figure is standing in contrapposto with his weight on his right leg. The copy of the statue preserved in the National Archaeological Museum of Athens has a fractured knee. It shows pores through which water leaked more than once, fracturing the limestone, which required several reconstructions. His head is tilted slightly to the right, restrained, as if apparently lost in the divine life.

The Diadúmeno, together with the Doríforo are the most famous sculptures of Policleto, forming three basic models for the sculpture of Ancient Greece that represent the three idealized youths in a convincingly naturalistic way. The statue illustrates the principles enunciated by Polyclitus in his Canon: the total height equaled seven times the height of the head, which is the length of the supported foot.

The Diadúmeno is an emblematic work of genuine classicism; the sculpture combines balance and dynamism, thanks to a skillful conjunction of the torsion of the back and hips. It also follows the principle of diarthrosis where the dividing lines between arms and legs, the lower edge of the pectorals, waist and groin are accentuated.

The original of the Diadúmeno (presumably made in bronze using the casting technique) has not been preserved and must have been lost at an early date. The best known copy is preserved in the Archaeological Museum of Athens. There are others, such as the British Museum in London, the Metropolitan Museum in New York and the Prado Museum.

The Roman copy of the Prado Museum, dated between 140 and 150 and considered one of the best, is somewhat distorted because in the seventeenth century an arm was implanted in the wrong way. It measures 202 cm and is made of fine-grained white marble.

Pliny's Natural History describes marble copies in Rome of the Greek bronze originals, yet it was not recognized until 1878 that the Roman marble copy from Vaison-la-Romaine (Vasio Romana, France), now in the British Museum, recreates the bronze original by Polyclitus.

In fact, Roman copies in marble must have been plentiful, judging by the number of recognizable fragments and complete works found (including a head in the Louvre, a complete example in the Metropolitan Museum of Art, the Prado specimen, and another complete example (the Farnese Diadúmeno) in the British Museum).

The Diadúmeno marble from Delos in the National Museum of Athens has the victor's cloak and a quiver, hinting that he is the victor of a bow contest, perhaps implying a reference to Apollo, who was also depicted as an idealized youth.

A fact that points to the continued artistic value attached to the Diadúmeno type in the modern period, once it was again associated with Polyclitus in 1878, can be obtained from the facts that a copy was among the sculptures lining the roof of the National Museum in Athens when it was completed in 1889, and that the Venus Aesquilina has sometimes been interpreted as a female version of the Diadúmenos type (a diadúmena, or woman tying a diadem).