The Ephebe of Critios is an ancient Greek statue in Paros marble discovered on the acropolis of Athens, attributed to the sculptor Critios and dated around 480 BC.

The statue was discovered in 1865 during the foundation works of the ancient Acropolis Museum in Athens. The torso and part of the limbs were first found. Twenty-three years later, the head was found between the museum and the wall of the acropolis.

It was buried in the last level of rubble which corresponds to the destruction caused during the Second Medieval War and the plundering of the Acropolis, in 480 BC. The discovery of the head is an essential element for the dating of the statue and its stylistic study.

Initially, the head 699 from the Acropolis, made of Paros marble, dated to the middle of the fifth century BC and found at the same time as the torso, was considered to belong to the statue in the reconstruction carried out by Adolf Furtwängler between 1878 and 1880.

The head that currently completes the torso of the ephebe was found in 1888 during the work and excavations carried out by Panayiótis Kavvadías and Georg Kawerau, between the museum and the southern walls of the Acropolis: immediately recognized as belonging to the torso 698, the head replaced the previous one.

Humfry Payne was the first to point out the chips present on the joined parts of the torso and head, which he believed to have been made in antiquity during a repair The statue underwent a first restoration in the 1950s or early 1960s when the iron plug that held the two parts together was replaced by a more secure bronze plug.

A stucco joint was added between the two parts, leading to a lengthening of the neck by about 1 cm and an arbitrary position of the head in relation to the body.

In 1987, a second restoration operation revealed the arbitrariness of the first and allowed us to understand how the two surfaces actually fit together at certain points, especially on the front and right side of the neck, leading to their recognition as originally relevant, a relevance also confirmed by the observation of the musculature that continues uninterrupted through the fracture.

The statue depicts an ephebe, a naked young man, in a natural position with his arms at his sides. The scale is noticeably smaller than life, the statue would be about 1.17 m tall. The two forearms and the lower legs are missing.

This is an evolved form of the ancient kouroi, but for one of the first times in Greek sculpture, the position of the body presents the contrapposto attitude: a wiggle that puts the weight of the body on one leg and a slight rotation of the head. 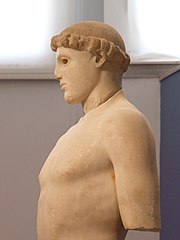 Unlike the kouroi of the archaic style of Greek sculpture from 650 to 500 BC, the eyes are hollow, they must have been inlaid with stones or colored glass, and the smile has practically disappeared, replaced by a deeper expression. The general modeling of the body is more realistic.

It could also be that the statue is a representation of the hero Theseus and not an anonymous representation, offering to a temple or decoration of a tomb. The attribution to Critios comes from the resemblance of the head with that of Harmodios, one of the two Tyrannoctons, work of Critios and Nesiostes, known by Roman copies. On the other hand, the inlaying of the eyes makes one think of the work of a bronze sculptor, as Critios was also.

By its general appearance, still somewhat hieratic, but also by its already very naturalistic treatment, the Critios ephebe is often considered as an example of the transition between the late archaic style of the end of the second century B.C. and the first classicism , still called severe style.

The Critios statue shows a clear evolution, or sculptural virtuosity, compared to the Strangford Apollo in the British Museum, which predates it by only a few decades; the volumes are more modelled and, as John Boardman says, it is "the work of a sculptor for whom the human body is no longer a mannequin with stiff limbs, but a structure of flesh and bone. "

The headdress is peculiar, with a circular bead, very close in style to that of the head of the blond ephebe (marble, c. 490-480 BC, Acropolis Museum, no. 689. H. 25 cm). It too was found on the Acropolis, it shows traces of yellow-brown paint in the hair which may suggest that the Critios ephebe was also originally painted.

Another bronze head of a young man in the National Archaeological Museum in Athens, dated to the same period, shows this type of hairstyle and still has the inlay of the eyes.